Learn how this steel-setting entrepreneur is making a positive impact in the trapping industry.

Linda White, proprietor of Trapping Girl, Inc., co-owner of Sawmill Creek Baits and Lures, and founder of Kids for Catches has quickly become a notable name blazing a trail through the trapping industry.

She can trace the origin of her trapping journey back to a single moment.

On their first date, Linda White’s now-husband Michael sat her down and told her, “I’m a trapper, hunter and fisherman. If that’s a problem we need to know that now.” 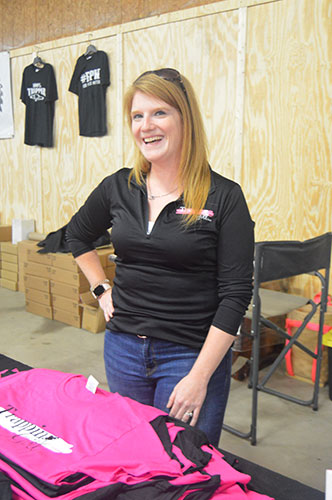 For White, it wasn’t necessarily a problem, but she didn’t know anything about trapping. She was curious, so she joined Michael on the trapline to learn more. On her first time out, she hopped into his truck and he handed her a notebook and told her if she was coming she was going to have a job. She was responsible for marking down what furbearer was caught at what location, what baits and lures were used, and any other notable details.

As they made their way through the line, she listened as he explained the trapping processes and theories.

“He was so passionate about it,” White said. “His whole face lit up as he talked about it.”

On one cold, drizzly, muddy day that season they came across a set where a coyote had managed to pull the set. Michael was disappointed and he thought the coyote was long gone. Linda scanned the area and noticed a mud trail leading to a disrupted area of bushes. That’s where the coyote was, and she was elated that she was the one that found it.

That experience sparked her interest to get more involved, and before long, she was hooked; that was just the beginning. 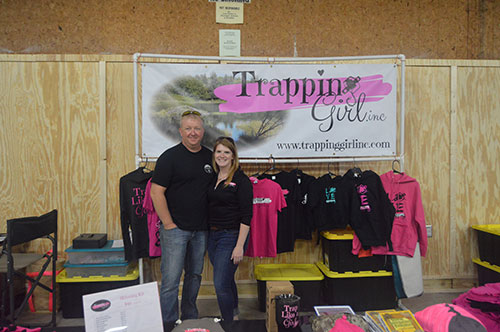 When most people think of a trapper, they conjure up the image of a gruff, fuzzy-faced mountain man with a pack basket strapped to his back. Linda White isn’t that. She is a trapper but she’s petite and feminine. When she started running her own line she started out using equipment borrowed from her husband. After making a few sets, she was struggling with the heavy, clunky gear. The hammer was too much weight for her to use repeatedly, the gloves were too loose and sloppy on her small hands. She was frustrated.

“By the third or fourth set I was tired and it wasn’t fun,” she said. “I realized how difficult it was. Having equipment that fits properly matters. Gloves, for instance; when you run your own line you have to have gloves that fit well. I needed a lighter weight hammer. Women need equipment that fits them better.”

Inspired by her own experiences, Trapping Girl, Inc. was established to supply female trappers with equipment that is tailored to their needs. Since starting out, she has also branched out into youth trapping gear and adaptive trapping needs. 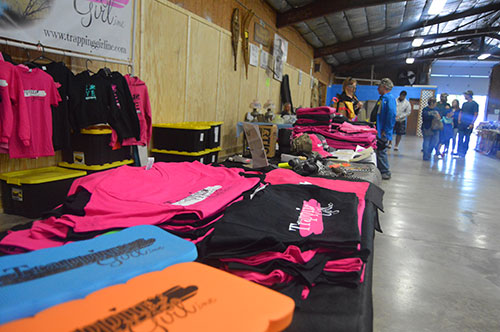 “I figured out that if I was going to do this, I would need to find the most efficient, simple and lightweight equipment that I could,” she said.

The first focus of Trapping Girl, Inc. was to compile starter kits to make trapping more accessible and enjoyable for new female trappers. It has since grown to include all kinds of equipment and apparel.

“From a woman’s point of view, it can be intimidating when you’re starting out,” she said. “Women do things differently. For example, the techniques of what I do when I’m trapping versus what my husband does are different, because we are physically different. It’s been really cool to have women reach out and tell me their stories and what they do, and how they do it differently.”

Trapping Girl, Inc. has opened an avenue of communication for White to connect with people in the trapping industry. Through her business she has helped people of varying ages and abilities actively participate in trapping.

She helped a little girl who has been tromping through the woods alongside her father since she was 4. Her father now has PTSD after an attack, and she has taken on a more important role on the line.

“She’s learning that time with her daddy on the trapline now is more valuable,” White said. “She loves that I’m making stuff that helps her do these things with her dad. He will tell you that they have a much stronger bond because she feels like she’s a part of it — she’s doing it herself and she has the equipment that she needs to do it.”

White has a customer who is a 70-year-old woman who has tagged along with her husband for many years on his trapline.

“She used to do just what I did, ride around in the truck,” White said. “This last season she got out and helped and she felt comfortable enough to do it.”

One product in particular, her brightly painted yellow trap setters, helped White realize that the adaptive equipment she sells can help seasoned trappers, too.

“I have gentlemen that approach me with arthritis and other issues that will tell me how they need this product,” she said. “It’s a pride thing, many of them don’t want to say they need a tool, but whenever there is a struggle it is not fun. They want to enjoy the sport and with a tiny adaptation they can enjoy it again.”

She sold a kit to a woman in West Virginia who told her that simply having equipment that is made for someone like her gave her the confidence to begin. 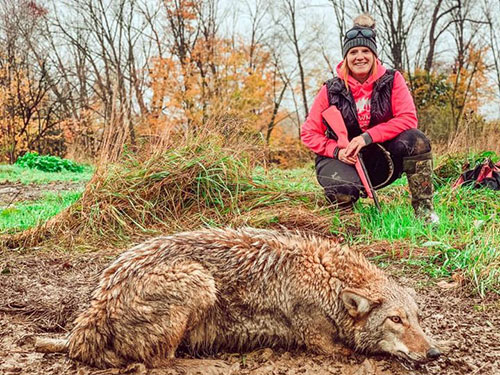 “I find inspiration in those people,” she said. “That’s what it is about; they are here and they are doing it. I hear these stories and I think ‘heck yes!’”

Before she launched Trapping Girl, Inc., her first business venture in the trapping industry was Sawmill Creek Baits and Lures, which she started with her husband, Michael. He had been making baits and lures at home and giving them away for years.

She knew it was a quality product and that there was a market for it at industry conventions, so she encouraged him to start selling them.

“I came home with a business license, a name and a logo and said, ‘this is what we’re doing,’” she stated.

To promote the business, the Whites exhibited at nationwide industry shows and conventions. While working at those shows she noticed that the crowd contained a predominantly older demographic.

“It really made me sit back and think about how we need to be promoting trapping to kids,” she said. “We needed to figure out a way to get them involved or the trapping industry will die.”

To address this, White started a group called Kids for Catches, which promotes trapping to youth and provides kids with free equipment. Kids for Catches connects companies and organizations that are already in the trapping industry with children who are interested in learning more. Kids for Catches puts together trapping starter kits that include products like traps and lures, that are then distributed to the kids at no cost. The idea is to get trapping equipment into the hands of kids that are interested but might not have the resources to pursue it.

“The organizations are able to give these kits out to get the kids involved,” White said. “And when the kids go home they have something to use.”

Organizations that are interested in getting involved with Kids for Catches can email Linda at kidsforcatches@gmail.com.

White also writes a column in the National Trappers Association’s publication American Trapper called “The She Side.” In the column she features stories about women trappers.

“The response to the column has been amazing, not just from women but from men too,” she said. “They have said how great it is for their daughters or their wives to see other women trapping. There are so many women that are actually trapping right alongside men. So many children these days are getting involved, too. I talk to a lot of the trapping camp directors across the nation and even the applications for little girls to attend have skyrocketed. This column really highlights some of the different perspectives of women on the trapline.”

Since immersing herself in the fur trapping world, White has tested her own limits and surprised herself with her own persistence to continue. 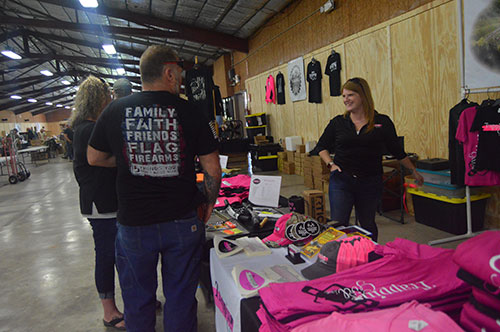 “Trapping is a fun hobby, but at the same time it is so much more than that,” White said. “Is it hard work? Absolutely. Are there times when I’ve stood in the middle of a field screaming that I never want to do this again and started crying? Absolutely. But it’s so much fun and that keeps me coming back.”

Being part of a couple working in the trapping industry has had its struggles, but for White, the best thing about being involved with trapping is being able to share it with her husband.

“It has really made our relationship stronger,” she said. “There are so many things involved, you have to learn to work together. Our trust in each other has deepened. There are days when I think he’s going to leave me in the field, but overall my favorite thing about trapping together has been our relationship growing.”